Tekst by Stef Veldhuis
​Sound of the North Sea is a composition for string quartet, organ and piano based on data about the temperature and cod population of the North Sea. The piece is commissioned by Rijkswaterstaat

Sound of the North Sea consists of two parts interchanged by variations on the same cluster chord. Part one uses data on the cod population measured between 1963 and 2018. The second part uses measurements of temperature measured 10, 100, 135 and 175 kilometers off the coast of Ter Schelling between 2009 and 2012.

​In the first part the string quartet plays slow chords with long pauzes between them in which the reverb of the chords takes center stage. This reverb refers to the imprint that the water leaves behind on the shore when it recedes back into the sea. A remnant of energy, just like reverb is a remnant of sound. Now and then the organ adopts one of the tones from the chord, like an artificial harmonic. This resembles the start of a new wave from the energy of the wave that precedes it. In measure 22 this relationship is turned. Here the organ provides the starting point for the following chord like the wind that creates the waves.
​ 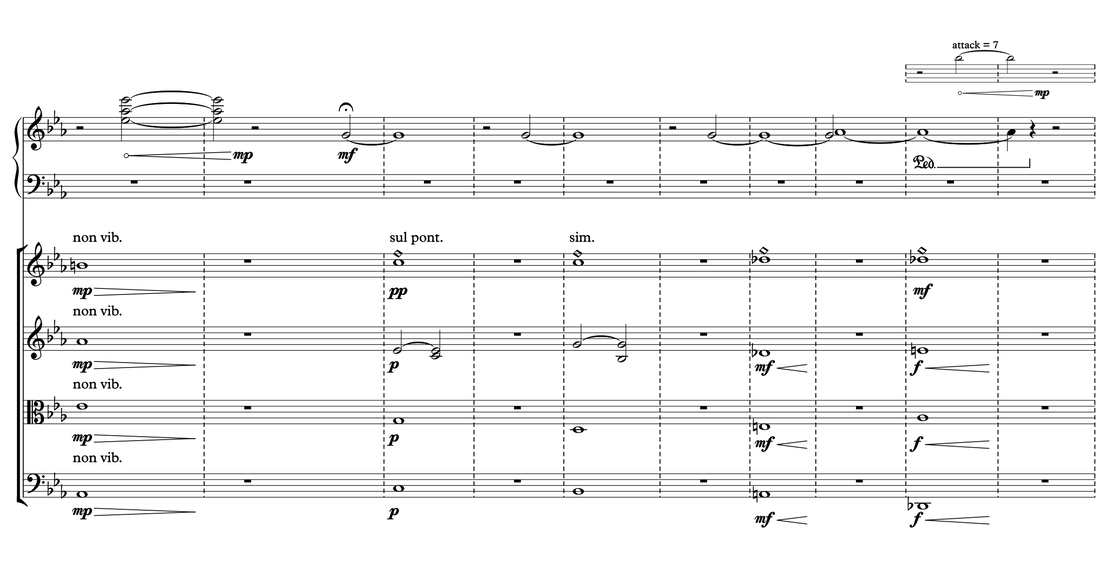 After this series of chords in part one a concentrated cluster chord is being played. This chord functions as a resting point between the two parts. The instruction “unsynchronized free bowing…” makes sure the chord stays in dynamic and mobile. After a short chromatic play between the cello and the violin the whole chord moves a half step in different directions like the crashing of waves.
Before and after this glissando the quartet uses circular bowing to create a rich tapestry of harmonics. A precursor of the circular bowing in the final chord.

In the second part we hear the movement of the water. For each instrument I have written seven different downward movements and linked them to different temperatures. The first violin plays data measured 10 kilometers off the coast of Ter Schelling, the second violin 100 kilometers, the viola 135 and the cello 175 kilometers. The melodies are based on a C minor chord in different positions.
These downward melodies and their variations weave through one another and create a pattern of waves. When the piano enters in measure 80 it takes on the role of the swell. It too plays a downward movement, but in quarter notes in stead of eights. This bigger, heavier movement gives direction to the waves on the surface and determines the harmony.
​

​Part two ends in a canon that starts with the viola and is adopted by the first violin and the cello. When this canon reaches its climax everything drops silent and we only have the reverb again. From this the same transition chord as we heard in measure 50 is played. In this final chord the quartet experiments freely with circular bowing to create a rich soundscape of overtones. The repetition of this chord gives a feeling of homecoming. A harbor after a long journey at sea.

For Sound of the North Sea I searched for inspiration in the visual arts. Especially the painting “Zeeberg” (Sea Mountain) by Thierry de Cordier formed a big part of the atmosphere of the piece. The serene and imposing form of the water with her deep, almost blackish blue conveys the contrasts of the North Sea in a most profound way. It is at the same time beautiful and dangerous.

Also the architecture of Tadao Ando and Peter Zumthor played a big role in the creation of this piece. The way in which these two architects frame nature in a human way connects deeply with this project. By looking at nature from its contrasting viewpoint; culture, we connect these two opposing elements. This convergence strengthens our appreciation for both components.
﻿