Is there music in the behavior of our oceans and how does it sound? Does it have a magnificent quality or is it chaotic and alienating? Does the Atlantic Ocean sound different from the Indian Ocean? And how does music manifest itself when its creation depends on an external, natural influence?

Music By Oceans uses oceanographic data as a source from which new music is created.
Collaborating with professors Erik van Sebille and Will de Ruyter of the University of Utrecht I created an array of new compositions based on data measured by ARGO-floats.

I experimented with different translation strategies. In the beginning the compositions where mostly direct sonifications of data. But the more I worked on the project the more I wanted to create something in which both actors, human and nature, where on the same level. These compositions, devoid of hierarchy, where among the most beautiful I have ever created.

The ocean does not write with the logic that we, with our centuries old musical tradition, have become so accustomed to. And in breaking with this logic a new musical language is created. One that, thanks to me as a composer, still refers to the western tradition, but is completely original in form and structure.

With this project I hope to engage a larger audience with the oceans. We mostly present the pieces in a keynote setting in which professor Erik van Sebille and me talk not only about the proces of creating with the ocean, but also about the urgency of the rising sea levels and the necessity of us humans to change our way of living.

As an artist my strength is storytelling. And it has become more and more obvious that we still need great stories to open the eyes of a lot of people to the reality and the dangers of climate change. Now, with the rise of right-wing populism and climate skepticism, science has to look towards the arts to help them convey their story to the general public in an engaging way.

Music By Ocean was performed at amongst others: TivoliVredenburg, Volvo Ocean Summit, Leeuwenberg Gasthuis, Expeditie NEXT 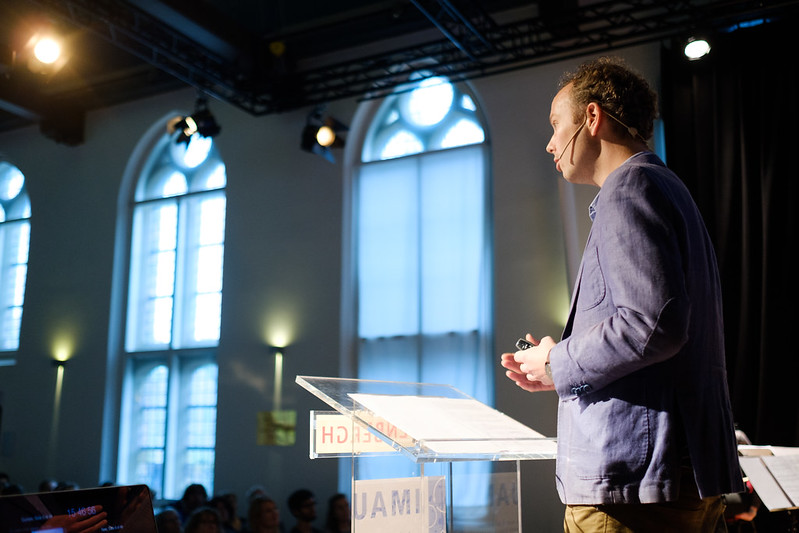